When Margaret Atwood picked up the story of Penelope and Odysseus, she kept all the familiar ideas, and yet - it is an entirely modern vision, and a modern voice speaking. She looks beyond the famous stars of the narrative: 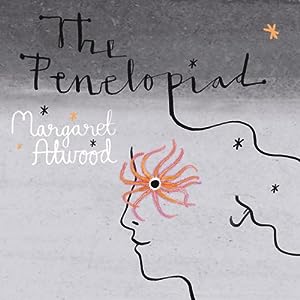 She has been dead for a few thousand years and she tells her story for a modern audience. Through the retelling of her life we learn much about her childhood, the time when she learns self-sufficieny the hard way, since her mother is very coldhearted and her father tries to drown her when she is still a child.

The character of Penelope in the Odyssey by Homer is described as very caring and she never loses faith in her husband. Her cares make her somehow flighty and excitable so that her husband and her son Telemachus leave her in the dark about matters rather than upset her.

She is also described as being true and faithful to her husband. But Margaret Atwood presents a definetely more interesting Penelope than the waiting, weeping and weaving figure we know her to be.

Atwood doesn't really give her a makeover, but she gives her a voice and let her tell her story from her own point of view. Penelope's narration is full of ironic comments about herself, her husband and men in general, the times she lives in and on women like Helen.

Penelope is an important figure in our literary culture, but we have seldom heard her speak for herself. The difference between the charcacter Penelope in the Odyssey and the Penelope in The Penelopiad can be clearly seen in the chapter, when Odysseus returns home after twenty years.

In the Odyssey, Athena must distract Penelope so that she does not discover Odysseus's identity when Eurycleia is washing him, since she can be so easily upset.

In the Penelopiad Penelope pretends not to recognise Odysseus when he returns, rather than genuinely being the passive female figure from Homer. Another disticntion between these two versions is that Penelope trains twelve young slave women from birth and then sends them among the suitors to spy.

This is the point at which Atwood is reinventing the story since there is no justification for this in the Odyssey. But although Penelope is also presented to be faithful in the Penelopiad, there are certain indications that she is not the faithful, caring wife that we know her to be.

During the narration there are short interruptions of a chorus of the twelve maids who tell about rumours which say that Penelope is to blame for their brutal death and that she cheated on Odyseeus. There is another story. Or several, as befits the goddess Rumour, who's sometimes in a good, or else bad humour.

Word has it that Penelope the Prissy- was- when it came to sex- no shrinking sissy. Even more baroque versions imagined that she slept with every single one of her admirers and that the result of all this coupling was the creature Pan.

The Penelopiad by Margaret Atwood

In the Penelopiad Margaret Atwood wonders if the marriage of Penelope and Odysseus was really happy, if a woman could be faithful during such a long absence of her husband as Homer described or what really happened on Odysseus journey.

But although she brings up all these questions, she does not answer them. She tries to animate the reader to reflect about the real character of Penelope and the true story.

That is to say that we don't know if Penelope is a reliable narrator or not.

She acts like she is speaking the language of truth, but it could be that she is telling us a story: A very special figure in Atwood's version of the Odyssey is Helen of Troy. She is presented as beautiful, heartless, spiteful and vain.

Her character provokes some hilarious and ironic comments by Penelope. Although Helen is described as very beautiful, she does not seem to be very smart in Atwood's version which is quite contrary to Penelope. Helen was very tall and extremely beautiful, Penelope was short and people emphasised her intelligence because she obviously wasn't as beautiful.

That, and my weaving, and my devotion to my husband and my dicretion. Her rivalry with Helen is a catfight: Penelope calls her 'poison on legs'.

But it is not only Helen's beauty, that Peneolpe envies so much, it is much more her ambition. She wanted to make name for herself.Margaret Atwood. The Penelopiad: The Myth of Penelope and Odysseus. In Homer’s account in, Penelope—wife of Odysseus and cousin of the beautiful Helen of Troy—is portrayed as the quintessential faithful wife, her story a salutary lesson through the ages.

The timeline below shows where the character Odysseus appears in The Penelopiad. The colored dots and icons indicate which themes are associated with that appearance.

The colored dots and icons indicate which themes are associated with that appearance. As Atwood admits, Penelope has been "in general somewhat neglected for the very simple reason that in the Odyssey she does four things: weaving, waiting, * * weeping - and she does sleeping.

Odysseus is Penelope 's husband, Telemachus 's father, King of Ithaca, and the hero of the Greek myth of the Odyssey, upon which The Penelopiad is based. Odysseus is described as short-legged, barrel-chested, and.